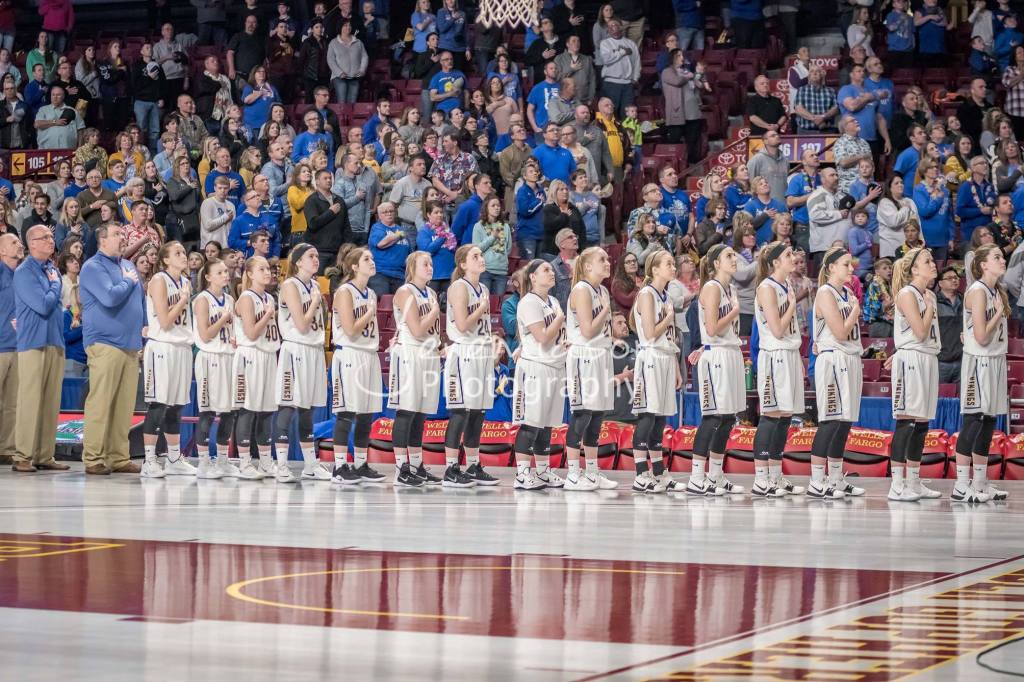 Dawson/Boyd boys’ basketball team played in the Section championship game, and the Minneota girls played in the state basketball tournament at Williams Arena. How blessed I am to be living in Western Minnesota and covering some of the best high school teams in the state. It is Sunday afternoon and I have had some time to reflect on the last few days. So here is Paul’s thoughts and observations from this past week.

It started for me on Monday, when the LQPV Eagles and Dawson/Boyd Blackjacks boys played for the Section 3A North Basketball Championship at the RA Facility in Marshall. I think all of Lac qui Parle County was in attendance. The game went into overtime with the Blackjacks taking the victory. Brad Greenwaldt helped me on the broadcast. Two outstanding teams, great atmosphere with loud fans cheering on their team. This will be a game people will be talking about for years!

I decided to take off for state basketball on Wednesday, because of the bad weather that was coming Thursday and Friday. I stayed in St. Cloud at my oldest son’s house and took off early Thursday for Williams Arena. The Minneota Vikings first game was with the Red Lake Warriors. Bryon Higgin of the Minneota Mascot sat next to me so he put on a headset and helped with commentary during the broadcast. This game was the most physical basketball game I’ve seen in a long time. It was ugly and rough. The Vikings however prevailed to advance to the semifinals on Friday. After the game I went to my daughter’s home to stay. We had pizza delivered and Seth, my son-in-law and I watched the Gophers men’s basketball team win over Penn State. Seth, is a huge Penn State fan, so it didn’t go to well for him. It was a very relaxing evening after a long day.

I found out on Wednesday that the boys section championship game that the Blackjacks were playing in was postponed on Thursday and would now be played Friday night in Marshall. So Friday was going to consist of broadcasting two basketball games. Minneota at noon at Williams Arena and the Blackjacks game in Marshall at 8pm. Kelsey Buysse and I broadcast the girls game with Heritage Christian Academy at noon. Another great game by Minneota and another win to put them into the state championship game on Saturday. I jumped in my car and left the cities around 2:30 and arrived in Marshall about 6pm with plenty of time to spare. Dawson/Boyd put up a good fight against WWG, but the Chargers won and will represent Section 3A at state this week. Blackjack boys are a fun basketball team to watch!

After the game in Marshall my plan was to drive back to the cities that night, but I changed my mind at the last second and wanted to sleep in my own bed. I drove back to Madison getting home around 11:30. I left for the cities at 6am the next morning to make sure I was at Williams Arena in plenty of time to broadcast the state Class A championship game at noon. Minneota’s opponent was the Goodhue Wildcats for the state championship! Molly Hennen and I were courtside broadcasting and the game didn’t disappoint. When the horn sounded the Vikings were state champs!! So much fun celebrating with the Minneota team and community.

Covering a state high school tournament, and it doesn’t matter what sport it is, it is a highlight for me. Each state sport I have covered over the years has been an amazing experience, it is so much fun being with the teams and the people from the different communities. I just wish each high school athlete, parents, grandparents and school could have the experience of going to state. It is making memories and bringing a sense of pride to your school and community.