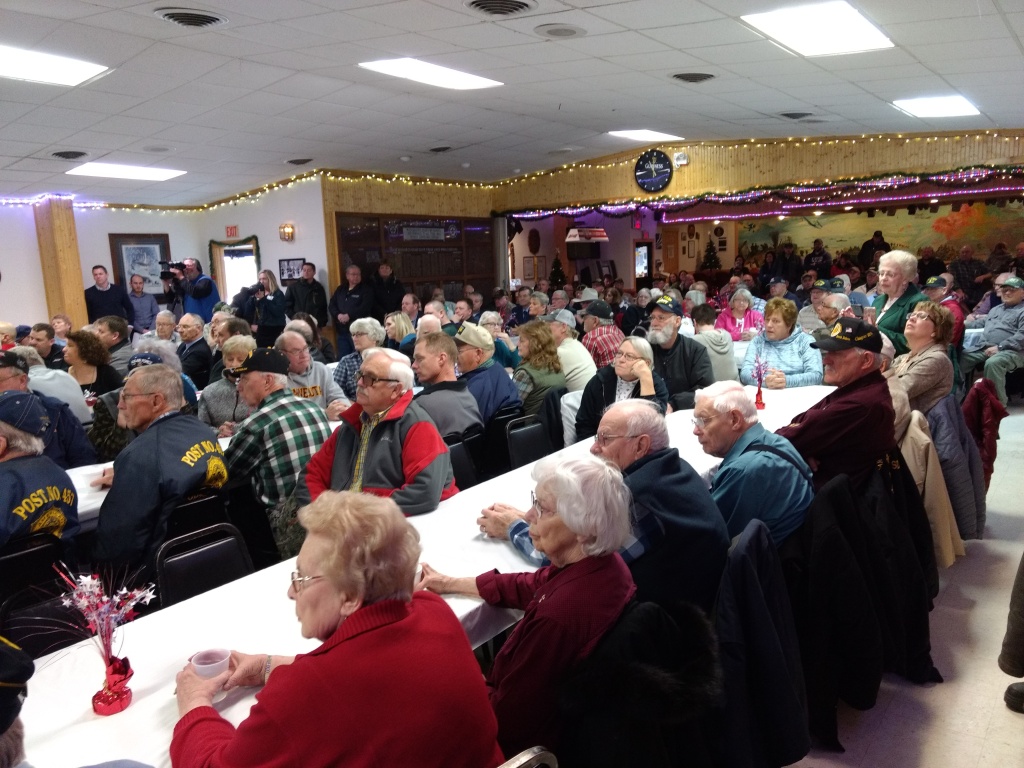 Have you ever been in a room full of war veterans? It is a very humbling experience to be among so many heroes in one room. I had the honor of being in Montevideo at the American Legion Post 59 last week for a big announcement concerning the Montevideo Veterans Home. I noticed most of the veterans were wearing their Legion or VFW caps.

The Legion was absolutely packed with about three hundred people, mostly veterans attending the press conference. Television cameras from the Twin Cities were present, along with local radio and newspaper people to cover this big announcement. Excitement was in the air, rumors were that a very large donation from a trust fund from a veteran whom had recently passed away was to be given to the Montevideo Veterans Home. Well, it wasn’t a rumor.

Jim Williams stood behind the podium and made one of the best speeches I have ever heard. Jim is well known around the Granite Falls, Clarkfield and Montevideo area. I know him from high school wrestling. Jim is my age and is in the Minnesota Wrestling Hall of Fame, He has refereed high school and college wrestling matches for many years. Jim had his family sitting in front of him when he started his speech about his brother Steve.

Jims brother Steve had served his country in the army with a tour in Vietnam. When he returned to the United States he was greeted by protesters. Jim showed a newspaper clipping from the Clarkfield newspaper that was just one sentence long, that simply said “Steve Williams returned home from Vietnam”. Jim said sadly that was his brothers  welcome home. Jim then had the Vietnam vets stand up and walk over to the legion wall where there was a black sheet covering a large poster. About 40 or so Vietnam vets stood by the black sheet and on Jims command asked them to reveal the poster. It was a poster of Steve, with a number of pictures of him in uniform. Jim then said loudly, Welcome home brother!

People clapped and there wasn’t a dry eye in the legion hall. Then Jim made an announcement that the Steve Williams Family Trust fund was donating 2.8 million dollars for the construction of the Montevideo Veterans Home!! Three hundred some people stood and applauded loudly, with Jim wiping away tears. What a gift to give! Steve had worked for Hormel Foods for over thirty years and retired to Nevada before his unexpected death.

I was deeply moved by being at the Montevideo Legion. I am not a veteran, but have family members that have served in the military and know firsthand what kind of sacrifices these people and their families make while serving our country. I was visiting with a few of them in Montevideo and they are very proud to have served this country. When you are with a veteran, thank them over and over again for their service, especially the Vietnam vets who did not get a proper welcome home! Thank you Steve Williams!