Recently on my Facebook page I posted high school sports pictures that I have taken over the years while broadcasting sports. Wow, did I get a response from doing that. People were private messaging me to post more pictures and thanking me. As I was looking at each picture, I remembered the story behind that certain picture. It brought back some great memories, so I thought I would share a few with you.

I went with the LQPV football team on a coach bus to New Ulm, to play the New Ulm Cathedral Greyhounds. It’s about a 2 1/2 drive. I sat in the front seats with the coaches. It was a great game with Isaac Gerdes kicking a field goal to win it for the Eagles at the end of the game. This picture is of me getting on the coach bus after the game and the boys roared with excitement celebrating the win! You can see Coach Smith high fiving everyone in the aisle. It was such a fun ride home. Some of the guys were wondering what I said about them during the broadcast, I thought that was funny.

This is Jordyn Kalthoff when she was a senior at LQPV. In 2009 Jordyn and the Shadows just won the Section dance team championship in Montevideo. Jordyn and I were both working at KLQP radio and were friends. She was so excited to be going to state dance. I’m so proud of Jordyn, since then she married and is now Jordyn Stulelberg and is the head coach for the Canby/Minneota dance team and doing great things with the Sensations! She also teaches 2nd grade at MMN in Madison. 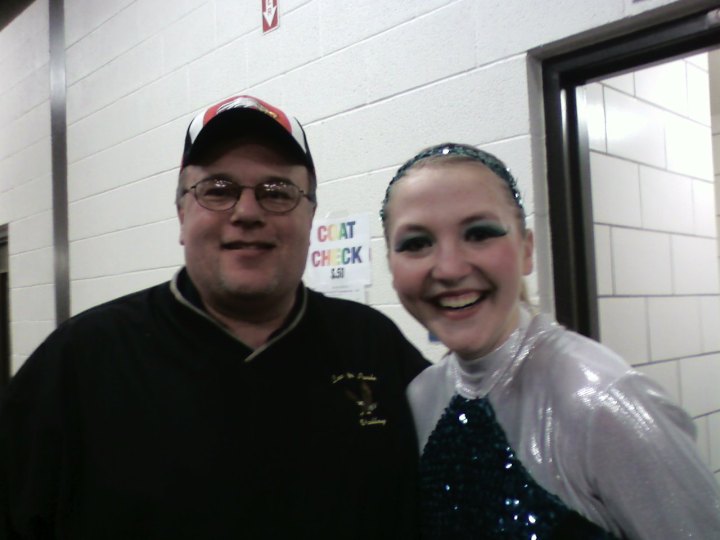 This group of young ladies and their leader Paul Hurkman from Venture were running across the state of Minnesota. Starting at the South Dakota border to the Stillwater bridge. Nuts right? This picture is right off highway 212 on the Minnesota/South Dakota border. They ran about 15 to 20 miles a day and sometimes more. They ran for a great cause, I encourage too check out www.venture.org

When I was a young boy I was a huge professional wrestling fan! I remember our family sitting in front of the tv in the late 1960’s and early 70’s watch All Star Wrestling on Saturday nights! Wrestlers like Mad Dog Vachon, The Crusher, Dr. X and one of my favorite wrestlers Larry the AX Hennig! I had the opportunity to meet Larry and even interview him at the Appleton Golf Course when the community of Appleton was celebrating Brad Rheingans Day! This was a great and fun day for me.

I really enjoy covering the state golf tournament at Pebble Creek Golf Course in Becker. LQPV’s Rachel Halvorson is one of the best golfers in the state. She has been to state since 7th grade and we have taken a picture at Pebble Creek each year. In 2018 Rachel placed first in the state! A state champion as a sophomore! Can’t wait to get my junior and senior picture with Rachel at state golf!! She’s really good!

This is Austin Buysse, I believe Austin was a junior at Minneota High School at the time of this broadcast from the Barn. The Minneota girls basketball team were playing Goodhue in the Class A semi-finals, a win would put the Vikings in the state championship the next day. With twelve seconds left in the game Goodhue had a two- point lead and the ball underneath their basket. It didn’t look good for the Vikings. Then it happened. Taylor Reiss intercepted the inbound pass and went the length of the floor for the layup and was fouled. Taylor missed her free throw but Megan Larson rebounded and scored at the end of the game to secure the win for Minneota. Austin and I went absolutely nuts when Taylor picked off the inbound pass! We were jumping up and down and screaming like little boys. I almost fell over the edge, luckily Austin was hanging on to me. To this date, I love listening to the replay of that call with Austin! Fun times. 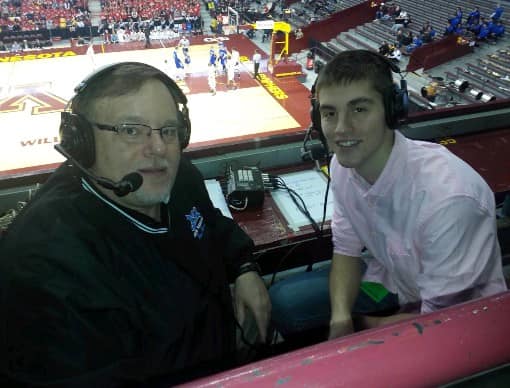 Well I could go on and on with this blog, I literally have taken thousands of pictures over the years! I am thankful for all these pictures and selfies, it makes me smile. Great memories with a lot of great people. I am blessed to have a great job and great friends.

2 thoughts on “MY PICTURES TELL A STORY”